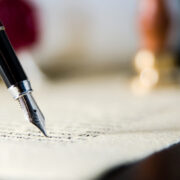 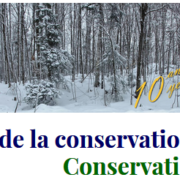 View our February newsletter on Mailchimp 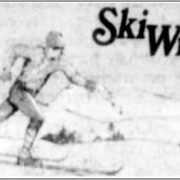 Following our article last month about the Quatre Vallons cross-country ski trail maintained by Mr. Gilbert Beaupré, here is a sequel about the old Skiwippi trail which many readers will fondly remember.
The old 33km (20 mile) long trail went from Auberge Hatley (Robert and Lilian Gagnon) via Hovey Manor (Stephen and Kathryn Stafford) to the Ripplecove Inn (Jeffrey and Debra Stafford). It was the 1980’s and cross-country skiing had become very popular. Herman Smith-Johannsen (1875-1987), nicknamed Jackrabbit, is credited with introducing the sport to Canada. Originally from Norway, he was a  pioneer in North America and spent his life promoting his sport. Interesting fact – He died in 1987 at the age of 111.
In 1985 three of the Townships top inns created an innovative and luxurious skiing and dining experience. This award winning idea, recognised by the provincial government as a first in co-op marketing was a hit with tourists and locals. The alliance offered the clients a unique opportunity to ski from one end of the lake to the other. The package included six nights’ luxury accommodations, six country breakfasts and gourmet dinners. Skiers slept in a different hotel every second night.  Bags and sometimes guests were transported to the next stop.
When interviewed, Mr. Stephen Stafford said people loved the idea and quite a few of his customers came to the hotel because of the huge amount of publicity generated by the Skiwippi package.

Articles appeared in the 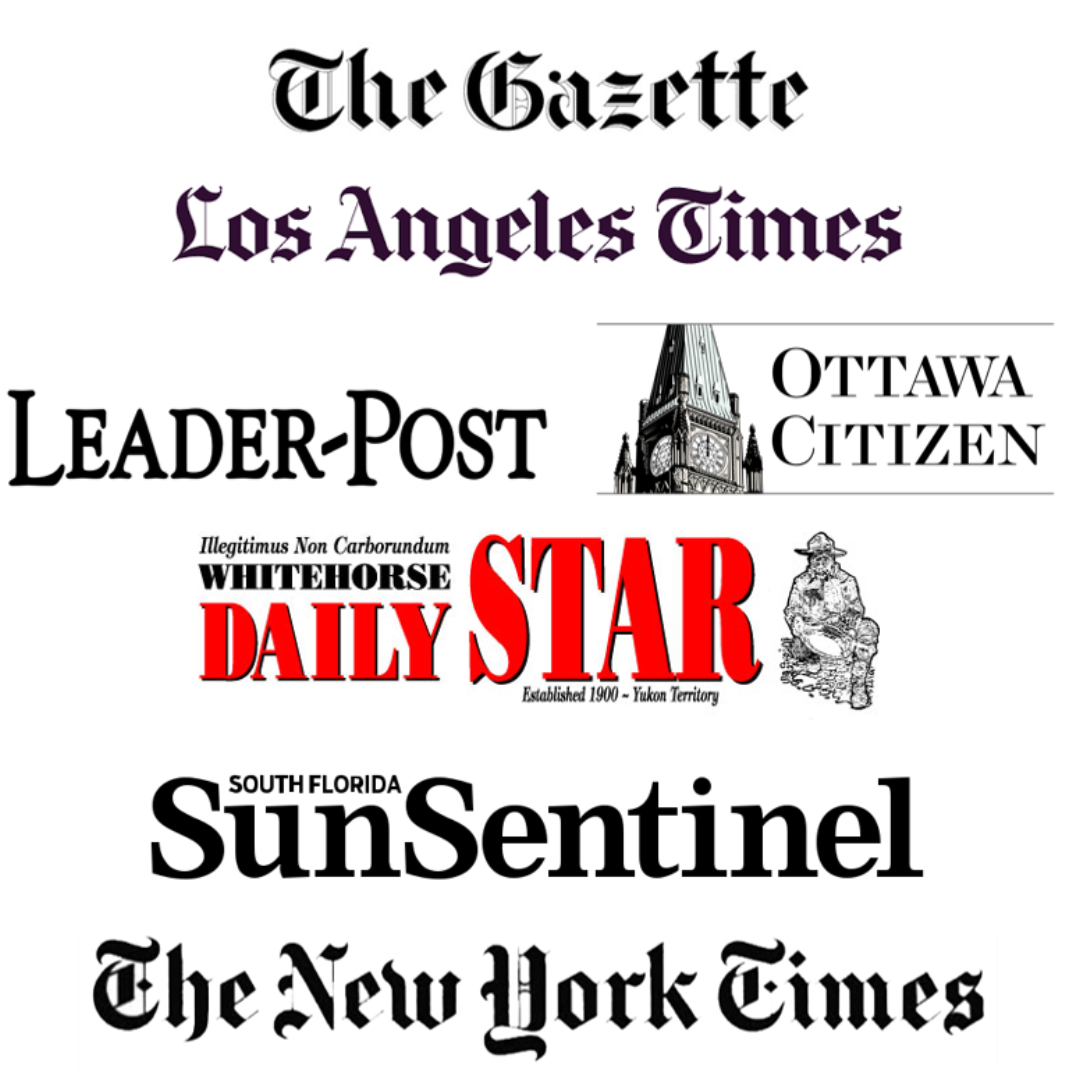 Nordic Skiers Pampered with Fine First Class Fare
SNOW-COUNTRY DEALS HELP TO BREAK THE ICE
“QUEBEC’S SKIWIPPI TRAIL links the Hatley Inn and Manoir Hovey in North Hatley, and the Ripplecove Inn in Ayer’s Cliff overlooking Lake Massawippi in the Eastern Townships.”
High Class Ski Week
Canadian Skiing Trail Is the Inn Place to Be
“The best part of the trail, however, is that it links three of Quebec’s best inns. After a day in the frosty outdoors, the inns–Auberge Hatley, Hovey Manor and Ripplecove–glow in the darkness, beckoning skiers to evenings of fine dining and vintage wines.”
CROSS-COUNTRY WITH COMFORT IN QUEBEC
“The scenery and serenity of skiing from Inn to Inn.”
An Anglo-French Corner of Quebec
“Outward appearances in Estrie may suggest New England. But this is not New England. It’s certainly not Ontario either, the nearest Anglo province, nor even the Quebec beyond its boundaries. Trying to define it, the Quebec Government guide book describes it as being “a celebration of bicultural existence possessing a discreet Anglo-Saxon charm blended with ‘quebecoise’ joie de vivre.”
Find LINKS below.
The trail was free and open to the general public as well as guests of the hotels. Each hotel contributed to the upkeep of the trail. The rights of passage agreements were held between private landowners and the group.
Along with the three hotels another favorite stopping place was the Refuge Les Sommets, an outdoor base in St. Catherine de Hatley. It was at the end of chemin des Sommets, which turns off Chemin de la Montagne.
The view was amazing as was the lunch and hospitality offered by Madame Juliette Deland. She served rich hot Québecois food, including ragout, tourtière and the “best pea soup you ever tasted” to quote Stephen Stafford.
Michael Greyson, North Hatley native remembers Mme Juliette, an older silver haired lady, quite petite, who ran a great kitchen and large dining hall, with many tables often filled by Scouts, cubs or girl-guides. Especially in summer, but also winter weekends. During her 30 years, she welcomed and fed thousands of people, from diverse groups from all over the world. There were testimonials to her all over the walls, signed by grateful campers, who stayed in dormitories in separate buildings.

Michael also fondly remembers skiing through the field alongside Highland cattle, dropping down to the Hovey for a hot drink and carrying on afterwards down the lake. It was not an easy trail. It was filled with hills where you had to be sure of your skills.
The south end of the trail was in Ayer’s Cliff. You had to ski across the frozen lake before joining the southern mountain trail. The views were breath taking. The hospitality was the best blend Eastern Townships English and French culture and tradition.
The Auberge Hatley and the Refuge des Sommets are both gone. However sections of the trail are still available to the public via the Quatre Vallons trail which crosses the Massawippi trail.

Cross-country skiing is experiencing another resurgence. People are rediscovering the joys and benefits of being outdoors. How lucky we are to have access to trails right here in our backyard. 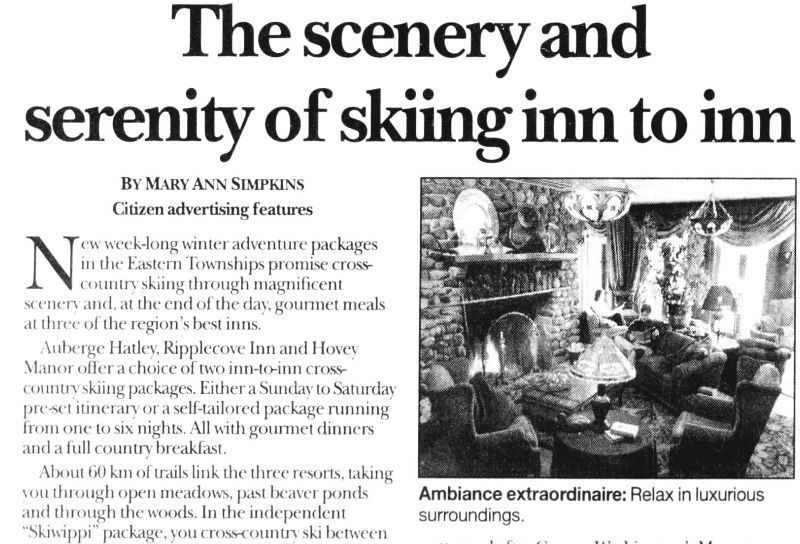 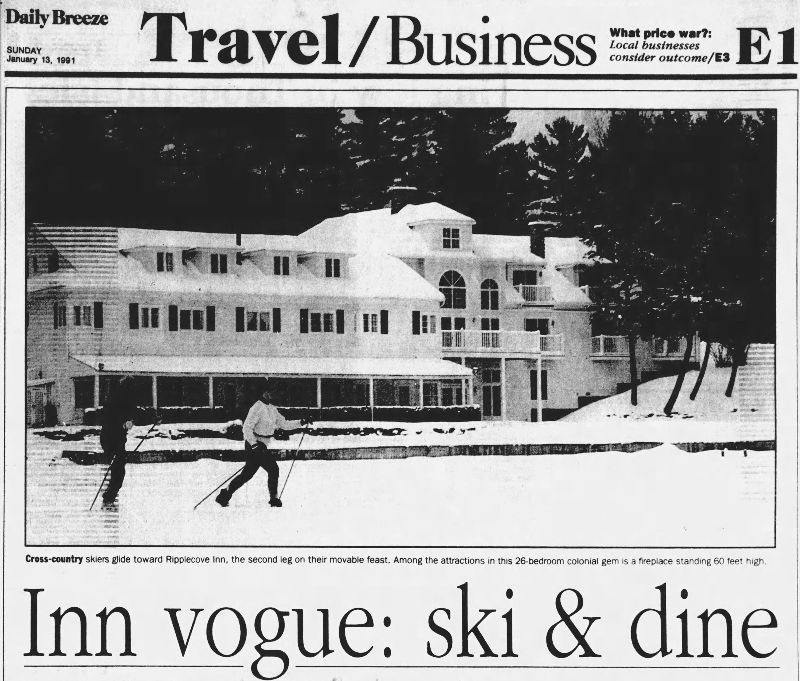 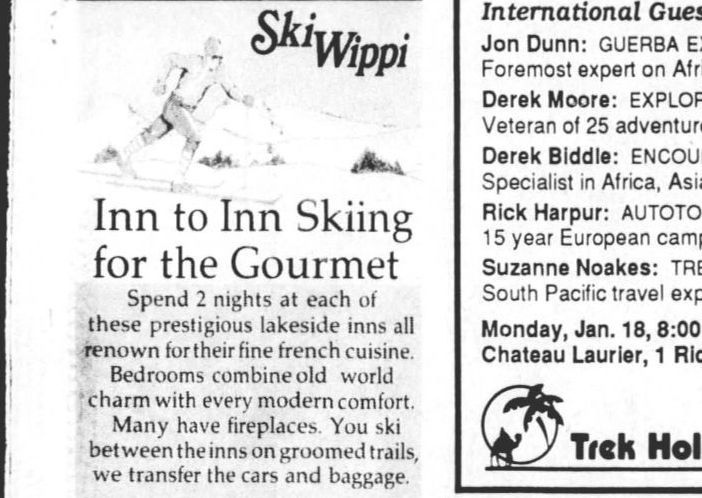 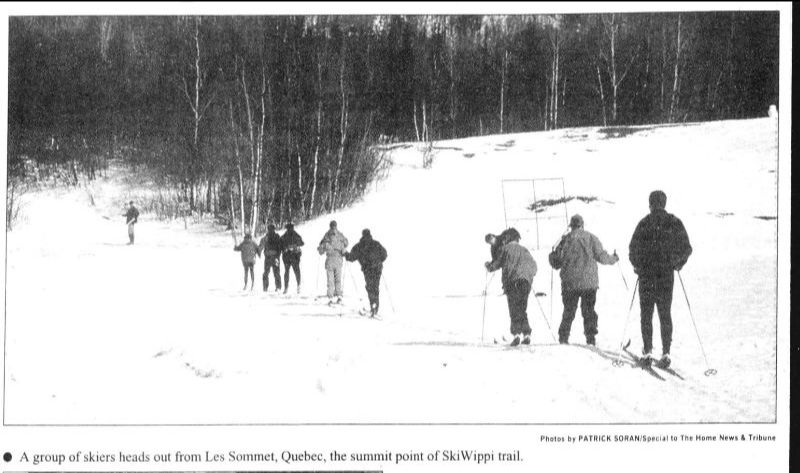 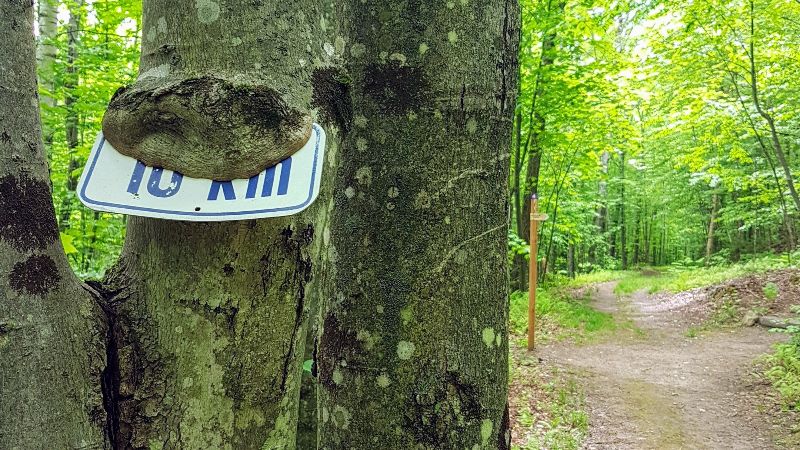 An old sign, left over from the Skiwippi Trail, still visible today on the Massawippi trail. 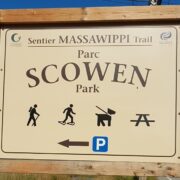 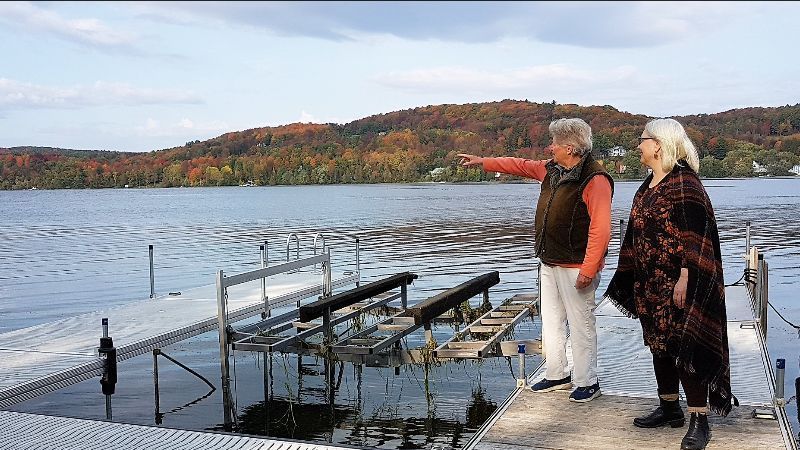 Originally a forest inhabited by Abenakis, this land now comprising Scowen Park was partly cleared in the early 19th century for settlement. Over the years, a sugar camp was built in the maple grove high on the ridge. Blackberries grew abundantly. Below, a house and barn stood, while cattle grazed in the pasture nearby.

In 1980, the land was bought by prominent businessman and Townships historian Philip Scowen, and his wife, Eulah (Reed), residents of North Hatley. Eulah was a descendant of the Reeds, early settlers who built houses and mills in this area once known as Reedsville. Soon after buying the land, Philip and Eulah donated it to North Hatley and Hatley Township for recreational use by citizens and to preserve it as a green space in the center of the growing village.
After 30 years of sitting vacant a solution was found by involving the Massawippi Conservation Trust.
In 2015 Margot Heyerhoff, in her role as Chair of the Massawippi Foundation, spoke with Annis Karpenko, who is a grand-daughter of the late Philip Scowen. They agreed that the land be donated to the Massawippi Conservation Trust so that it could be used as originally intended. So much time had gone by that the original people involved in the donation, the Mayors and citizens of the time who knew the intention of the donation were no longer around.
After a period of negotiation which included reserving a parcel of 1 acre for the possibility of a future Fire Hall, the other 34 acres were transferred to the Massawippi Conservation Trust in 2016. We would like to thank the members of the family (Martha Maksym and Annis Karpenko in particular) and municipal councils who took part in the negotiations. The park officially opened on Thanksgiving weekend in 2016 with initial public trails and many Scowen family members present. These were the first trails built by the Trust on conserved lands. Now with 4 ½ kilometers of trails at Scowen Park they are enjoyed for hiking and snowshoeing on a year round basis.
The park is maintained by the Massawippi Conservation Trust. One hundred trees and shrubs were planted by the local school children in 2019 at Capleton Road to provide a shaded path from the road to the forest. In July 2021, we plan to have an event open to all at the park to celebrate our 10th anniversary. The official announcement will be posted on our website and Facebook page, as well as in our newsletter.

The park is a generous legacy from the Scowen family for all to enjoy and work together to protect. We thank Philip and Eulah Scowen for their visionary donation and we thank their descendants for their role for making this park what it is today.

*P.S. The trails need ongoing maintenance. You can continue to support them through your donations.
Contact us at info@massawippi.org for more information. 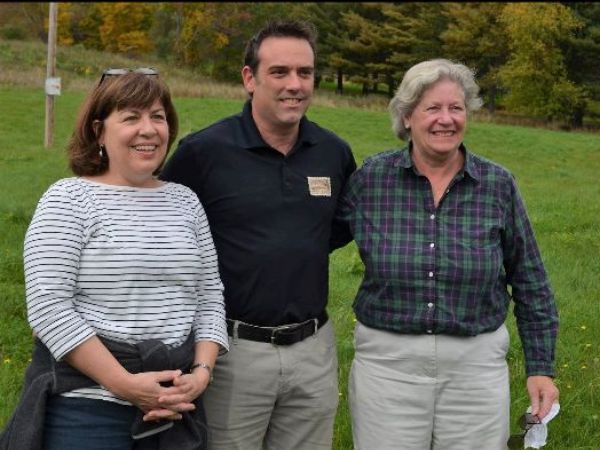 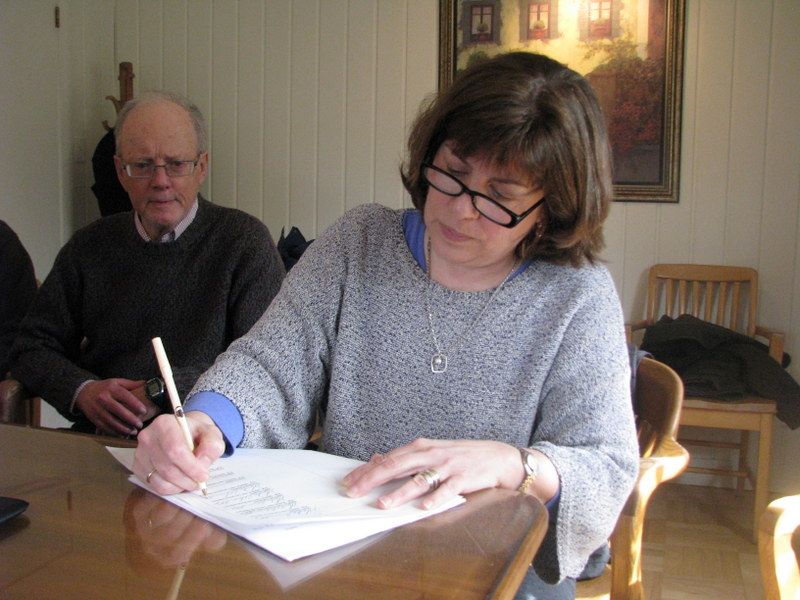 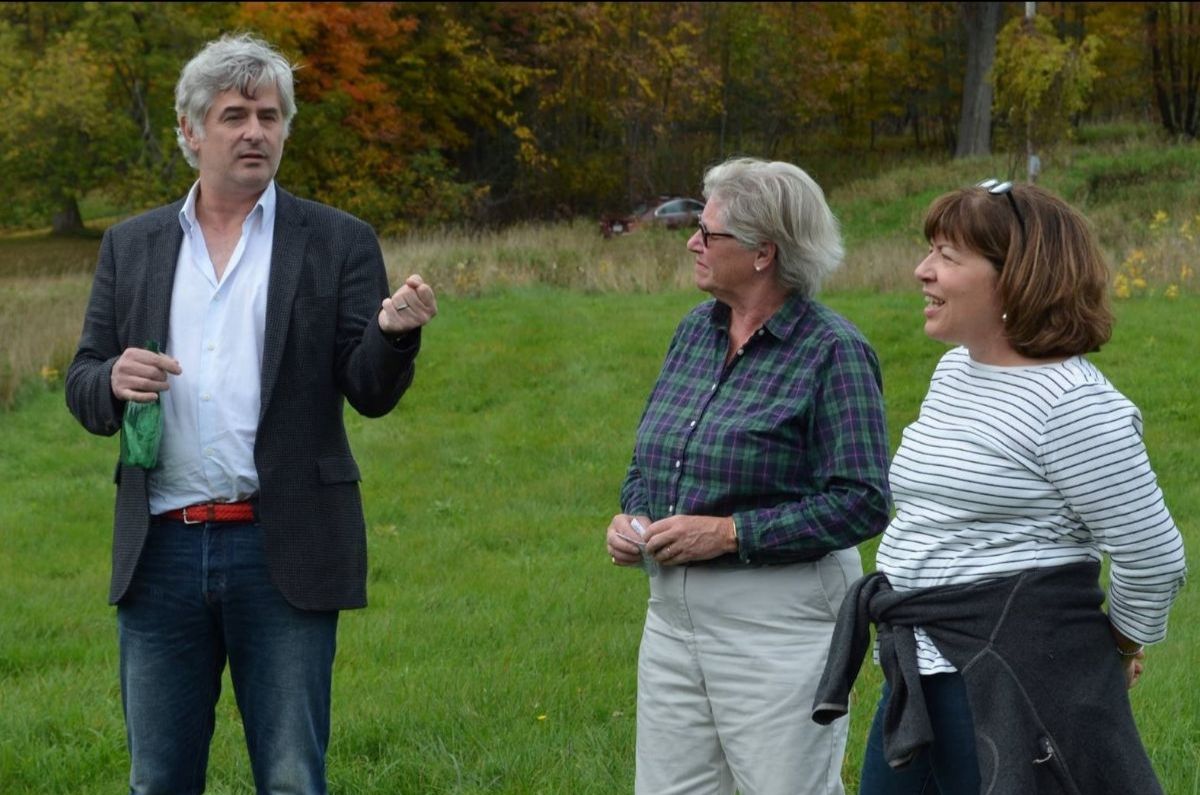 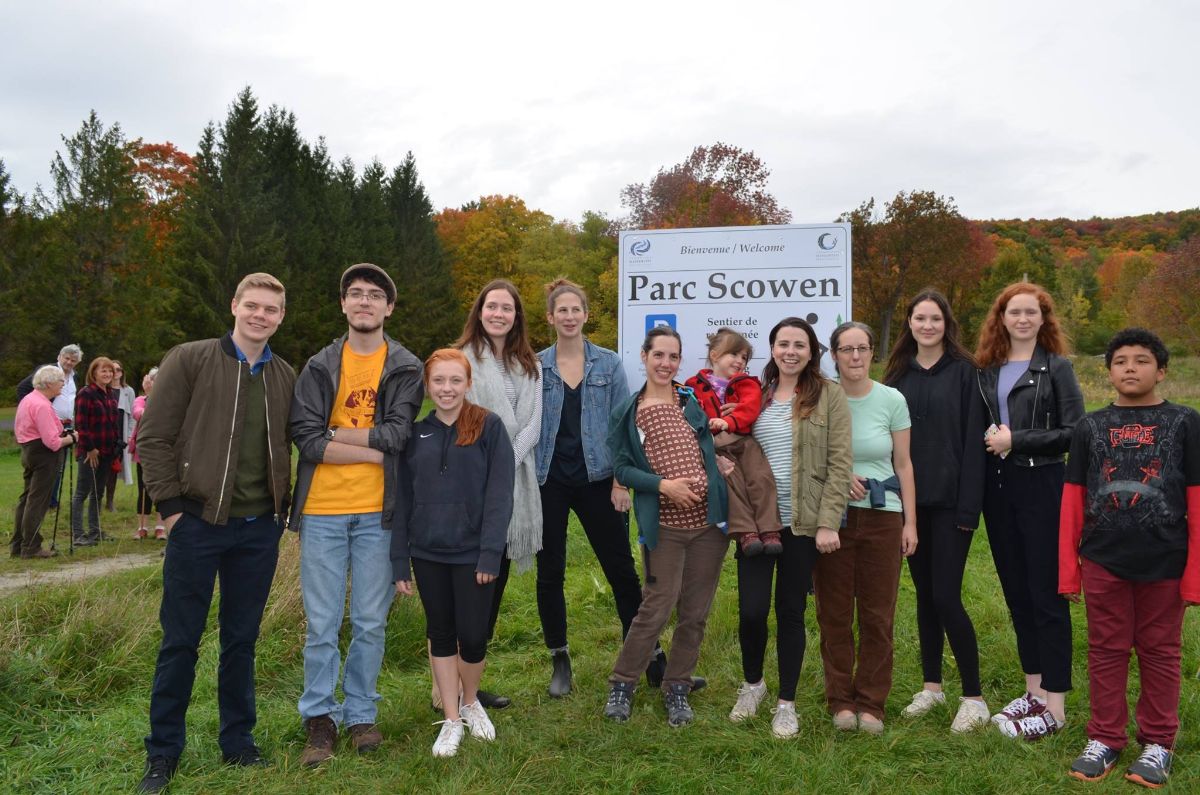 Decendants of Philip and Eulah at Scowen park during the 2016 Thanksgiving opening. 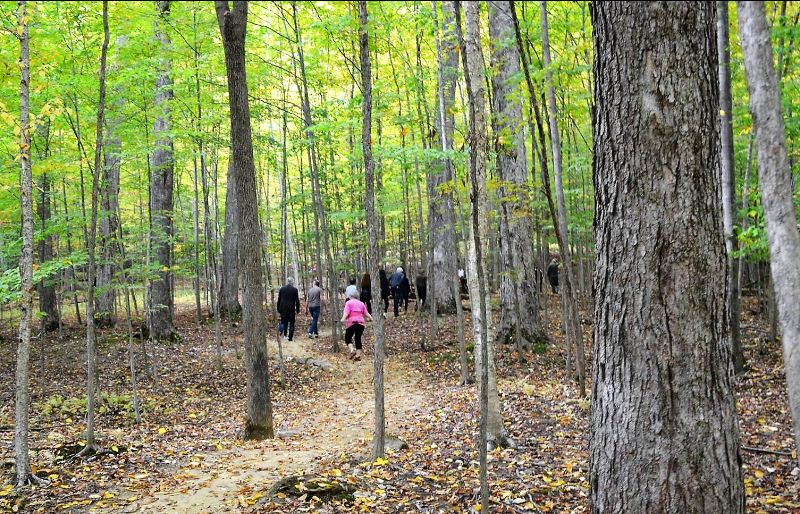 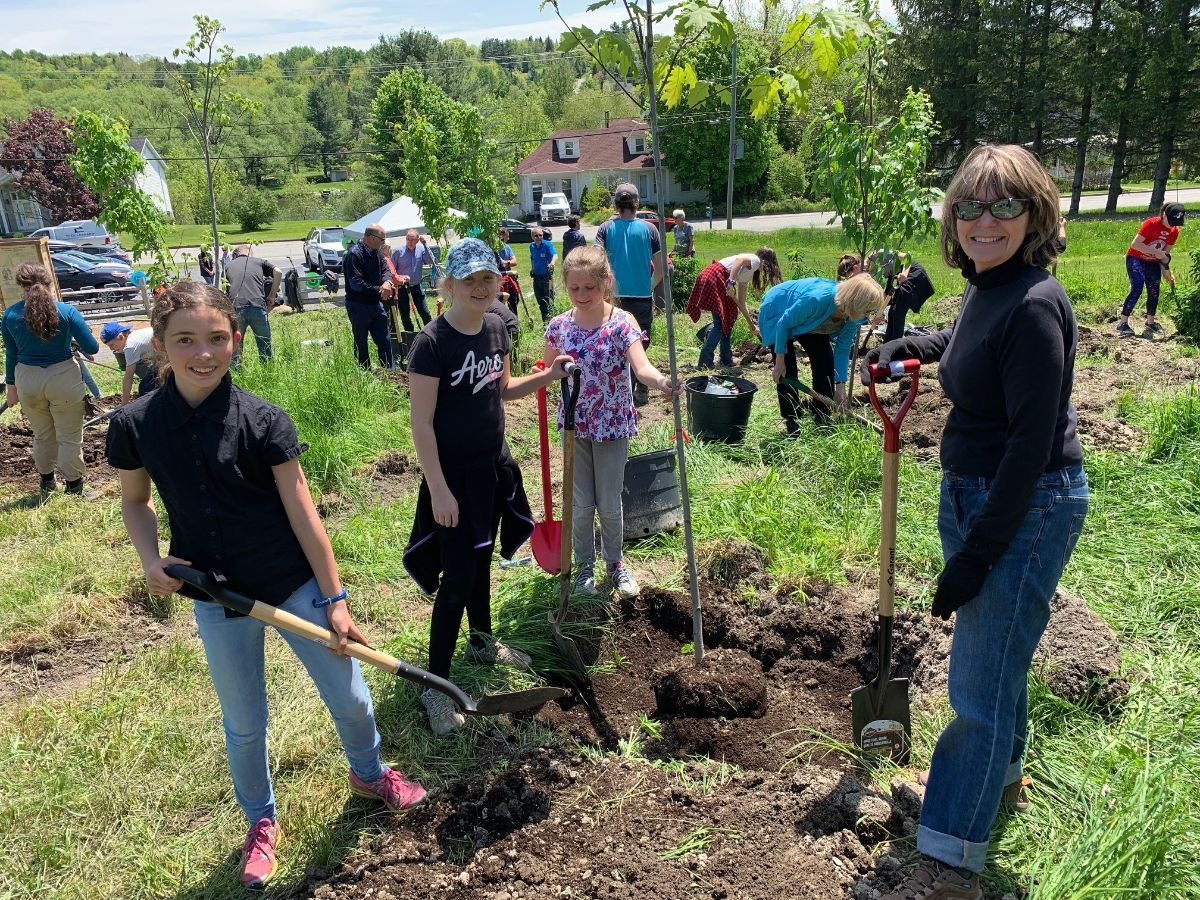