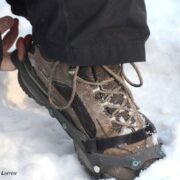 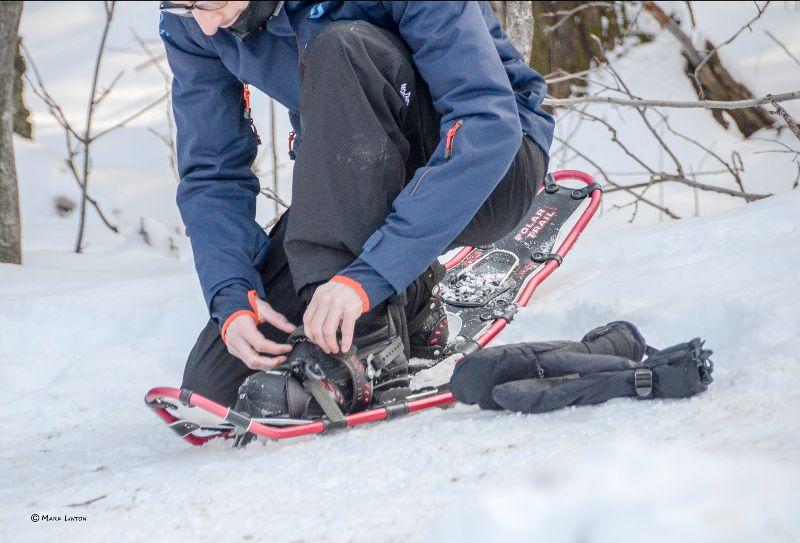 It is a question we ask ourselves very often before going for a walk in nature.

As the popularity of winter hikes increases, more and more products and accessories are available for sale to help make our experience more enjoyable. From walking poles to cleats to snowshoes to backpacks with first aid kits or water bottles, the variety of equipment is huge.
But for now let’s limit the talk to cleats (also called crampons) and snowshoes.
By definition cleats come in a variety of styles for use on city sidewalks to mountain hiking. For walking on a nature trail, ask the retailer to show you the middle range especially made for hiking. The cleats or studs are slightly more accentuated than the city sidewalk version.
Cleats are great to keep in your car, handy to have on hand (and foot). However they can rust easily, so remember to dry them well after use.
The Massawippi Trail is well travelled.  Most of the time the trail is hard packed with snow in the winter. As people are walking even after a fresh snowfall, you will find the snow to be trodden unless you are an early bird. This is the perfect venue for cleats which will give you good traction (except on sheer ice where nothing really helps, except possibly a prayer). We know they are popular because our wooden stairs down to Ethan’s beach got a bit chewed up last winter. This year those steps have thick rubber mats to protect the wood and the brave or curious who go down to see the lake in winter. Beautiful.
Often people choose to walk on the trails with snowshoes which has a long tradition in Quebec and provides a different exercise experience.
Snowshoes are designed to help distribute your weight when walking on thick, deep snow. They are designed for flat terrain. It is true that they help your grip but what about the stairs? There are so many stairs on the trails, from wooden ones to combined  stone and wood. Also steep downward pitches are not easy to walk across. How do you navigate those with snowshoes?
Whatever footwear you choose to use in winter, please remember to stay on the trails. This is a conservation area, winter or summer there are precious plants and wildlife all around. Resist the temptation to walk into the deep snow, off trail.  It is a very big terrain, close to 1,000 acres. By staying on the trails you won’t get lost and stranded.
Some people advise that you should carry both types of gear when hiking. For the Massawippi Trails, snowshoes are the best if there has just been a big snowfall but otherwise probably cleats or simple boots with good treads are fine. Check the weather and make your decision accordingly.

In the words of a local writer when asked about snowshoes or cleats, he replied
“Snowshoeing is for people who like to walk but with an added layer of difficulty.”
For more humorous stories look for Ross Murray’s book A Jerk in Progress…a story with a happy ending, “We could have died out there!” 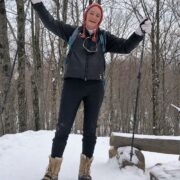 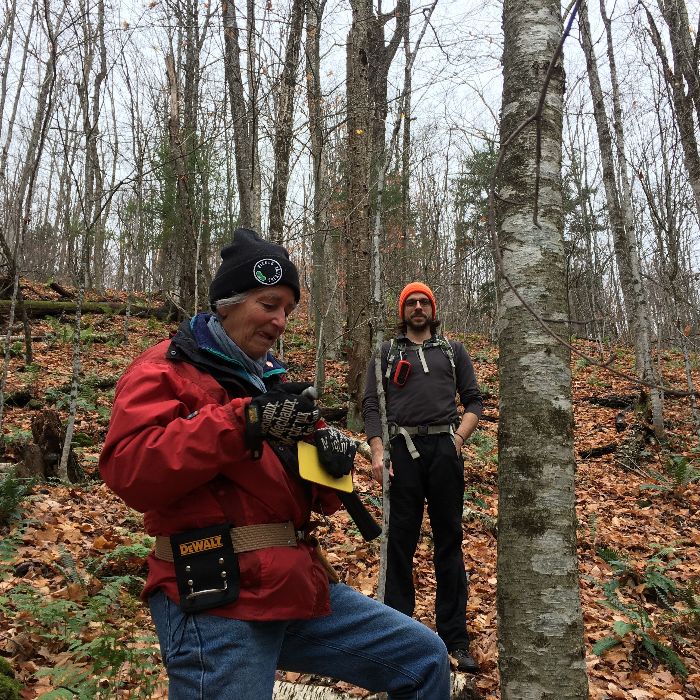 Jane is an outdoor enthusiast who loves nature and walking. You can see her striding through the village and walking on our trails year round. She has always loved walking and especially enjoys showing her visitors the Massawippi Trails when they come to stay in the region.
She is as intimately entwined in the history of North Hatley as is fellow board member Tom Wilcox. Jane is a permanent resident of North Hatley since retiring from her law career with the Federal government. Born in Sherbrooke, she grew up in Montreal and spent all of her summers in the village. Her great grand-father’s family bought their first summer home here back in 1920. Jane remembers summers spent in her family home, enjoying the independence which came with her 3 ½ horse power boat which she took across the lake each day to reach the North Hatley Club. In the 1960’s her father bought a large farm property in the Canton de Hatley where he planted trees and conserved the land. It was here that she took long walks with him and sometimes explored the land on horseback. She came back regularly to the property in the late 1990’s when she built some trails for walking, cross country skiing and snowshoeing.
Jane became involved with the Massawippi Foundation fairly early on as the Board was being formed in 2012. She was invited to join in 2013 and today she is its Chair. The passion and respect of the original group is as strong today as it ever was. None of them are environmentalists, but they all share a deep love for the natural beauty of the region and want to do what they can to protect it for future generations.
When asked if she found the area had changed over the years she says, “Not really, the buildings haven’t changed, only the businesses on the inside.”  She remembered the general store and hardware where the Pilson now stands, Earl’s was the Dep, and the Hob Nob, (now the Mercantile) where her family always picked up hot dogs and fries for supper when arriving from Montreal on Friday nights. Of course LeBaron’s was and still remains today.” The biggest change was when the railway was sold.” Thinking back she remembers when she used to walk along the tracks to get from one side of the village to the other, sometimes jumping off the bridge into the water, in order not to get run over by the noontime train. The walkway and gazebo are what remain today. A lovely place to get a view of the lake and the ridge behind it.
When the Sentier Massawippi opened its trails, Jane was there with her sister. She realized then that this would be the special place to walk keeping in mind that George Wardman Sr. had been a good friend of her Father. The Meagher farm property was sold in 2018 and Jane and her husband Jean bought an Airstream thereby joining a new community. Their choice reflects their love of nature. The Sentier Massawippi trails in North Hatley and Sainte- Catherine, are her preferred local places to walk. She likes the beauty of the trail and the views of the lake. Jane makes sure to speak about the Foundation and its conservation mission with visitors.
When asked if she is an environmentalist, conservationist, or nature lover, Jane chooses the latter, saying she loves nature and tries to do her bit to help the planet and her community. Her son has recently bought a property in the area and so the family tradition is continuing. 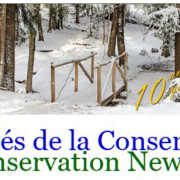 View our February 2022 newsletter on Mailchimp